Over the last year, CAA Niagara’s Grimsby and Niagara Falls branches have undergone renovations to create a more welcoming space for Members and clients. As part of this process, we are proud to display the works of local artist, Jon Shaw, that pay tribute to the Niagara community.

We sat down with Jon to learn more about what inspired when creating pieces for our branches.

The Start of Something Special

Jon has always taken a liking to art. As a young boy in his school days, he recalls drawing quality book illustrations. While he was not aware of it at the time, this was the start of something special. Jon continued to hone his craft as he got older and continued to develop his skills and a passion for producing unique pieces.

Jon has many projects that he is proud of, including his piece titled “Maroon Haiku”. As his largest and most ambitious work to date, a 5’ by 10’ canvas, the piece was sold to the owner of an NHL team. There is also “Abscess” – a large-scale piece documenting the demolition of the old General Hospital in his hometown of St. Catharines. Finally, “Mermaid Hustle”, a piece he produced during his tenure in Vancouver that focuses on recreating cluttered industrial and back alley spaces in British Columbia. 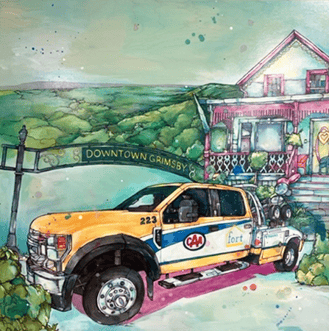 Greeting you as you walk into the Grimsby Branch is Jon's first piece. The painting features his signature style and imagery that relates back to some of the town’s landmarks. Depicted in the background is a view of the Niagara Escarpment and a nod to the colourful houses found in the historic Grimsby Beach area.

The foreground includes a “Downtown Grimsby” sign as well as a CAA Niagara tow truck that has been branded to promote the FORT Youth Centre, a Grimsby-based charity and former CAA Community Boost partner.

Consisting of two canvases, this project highlights one of Canada’s most well-known cities. The first is a bird’s eye view of the Niagara River and Niagara Parkway. A jetboat can be seen near the bottom left corner of the painting – paying tribute to one of the area’s most thrilling attractions. The second is a ground-level view and looks up to clear skies and a bridge connecting Canada and the United States. There are also butterflies fluttering around in both paintings, a tribute to the Niagara Parks Butterfly Conservatory.

If you would like to see these works of art for yourself, be sure to stop by our Grimsby and Niagara Falls branches. To learn more about Jon’s story and to view his collection of works visit jonshawpaintings.com.

CAA Niagara serves Members in the Regional Municipality of Niagara. If you live outside the Niagara Region, visit the CAA National website to find the CAA club that serves you.
® CAA, CAA logo and CAA Dollars trademarks owned by & use is granted by, the Canadian Automobile Association.
© Copyright 2022 CAA Niagara, Canadian Automobile Association. ® All rights reserved.